More bad news seems to be on the horizon. Please stay safe as we all wish you the best during this next Nor'easter. By Jack... Read More

More bad news seems to be on the horizon. Please stay safe as we all wish you the best during this next Nor’easter. 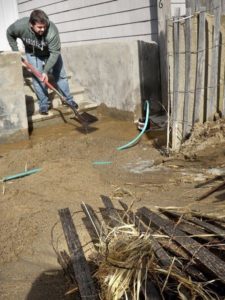 BRYAN EATON/Staff photo Jamie Emard of Smith Properties, a management company in Merrimac, uses a shovel Monday afternoon to create water flow and a submersible pump to drain the bottom floor of a property on North End Boulevard at Salisbury Beach.

NEWBURYPORT — In the aftermath of last weekend’s nor’easter that knocked out power, temporarily closed some areas and resulted in serious coastal flooding, officials are hard at work cleaning up local communities.

“We look fine,” Amaral said Monday afternoon. “I think we’ll be able to pick up everything that’s down on the ground by the end of today.”

In addition to the “five or six” trees that were knocked down in Newburyport, Amaral said DPS has mainly been dealing with fallen branches and also high tides bringing in debris at Joppa Flats and other coastal areas.

While astronomical high tides flooded roads on Plum Island and other areas near the Merrimack River, including Water Street and Cashman Park, Amaral said most of the city’s coastal flooding issues should be resolved soon as the high tides recede.

Salisbury Department of Public Works Director Lisa DeMeo said on Monday that although the town’s roads are all open, many areas are still covered with displaced sand, which town workers will clean up in the coming days. Meanwhile, she said, the storm’s effects are still being felt during high tides.

“We had to rebuild the dune at the end of Broadway after each tide,” DeMeo said. “Today, the ocean was still topping over the dune we built.”

DeMeo noted that the town elected to close certain roads to nonresidents as officials dealt with floodwater and sand over the weekend, which proved to be useful in speeding up cleanup efforts.

“I realize everyone wants to witness the awe of nature,” DeMeo said. “It’s about keeping the thrill seekers away because it always hinders our activities. We’ll probably do it again next time.”

In Seabrook, officials said cleanup is ongoing at the beach and on several roads, including Route 286.

“They did their job,” said John Starkey, manager of Seabrook’s Department of Public Works. “I try to be like Bill Belichick. We come in and we do our job.”

“We were concerned with too much sand,” said Starkey, who added that workers are using a vacuum truck to remove debris. “We can’t have that much sand on the street clogging up the drains.”

Cross Beach Road and River Street were closed due to high tides and storm surge. Route 286, which is commonly shut down during storms, experienced flooding along Seabrook Beach.

Brown’s Lobster Pound was surrounded by water, Starkey said, although the building is designed to withstand flooding from the marsh.

But just as things have started to wind down from the weekend, communities are bracing for yet another coastal storm that could bring up to 12 inches of wet, heavy snow and strong winds to the North Shore, starting Wednesday morning and continuing into Thursday.

The Massachusetts Emergency Management Agency issued a press release Monday, warning that snow is forecast to begin mainly after the Wednesday morning commute and continue through Wednesday night before tapering off during the morning commute Thursday.

But with winds predicted to come at between 30 and 40 mph, with gusts of up to 50 mph in some places, the storm appears to be less intense than last week’s nor’easter, which brought winds up to 70 mph to the Newburyport area.

MEMA also forecasts a smaller storm surge of about 2.5 to 3 feet, with 15- to 20-foot waves just offshore. At worst, the release said, the storm could result in minor coastal flooding and moderate beach erosion from the early Thursday morning high tide, which will hit Newburyport at 3:59 a.m. This will likely be the only high tide with any coastal impact.

Amaral said he is less concerned about coastal flooding and predicts the storm will be a much more manageable wind and snow event.

“It’s minor for us, we could deal with that with our eyes closed,” Amaral said. “It’s when you get over 12 inches of snow that it becomes challenging. And it’s going to be windy but not 70 miles an hour, which is nice.”

Jack Shea can be reached via email at jshea@newburyportnews.com or by phone at 978-961-3154. Follow him on Twitter @iamjackshea.

More bad news seems to be on the horizon. Please stay safe as we all wish you the best during this next Nor'easter. By Jack... Read More