What a  difficult and crazy weekend for many of us on the coast. Time to come together as a community to rebuild. We thought we... Read More

What a  difficult and crazy weekend for many of us on the coast. Time to come together as a community to rebuild. We thought we would share a store by Kelley Bouchard she can be contacted at 791-6328 or at: kbouchard@pressherald.com. Check out the Portland Press Hearld for more pictures. 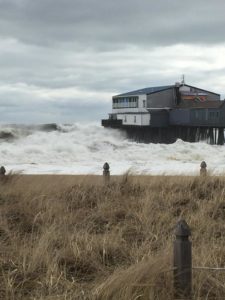 The nor’easter brought snow and freezing rain to southernmost Maine early Friday, while heavy rains and strong winds pummeled the entire Maine coast throughout the day.

Dozens of flights were canceled or delayed at the Portland International Jetport, including inbound flights from New York, New Jersey, Philadelphia and Washington, D.C.

Amtrak suspended service Friday afternoon in the Northeast Corridor between Washington, D.C., and Boston due to inclement weather conditions, including flooding and downed trees that caused a diversion around Woburn, Massachusetts. The last trains scheduled in and out of Portland ran late, according to Amtrak, but still made it to their destinations. The service alert for Woburn was lifted about 8:30 p.m.

Central Maine Power Co. reported about 3,600 customers were without power Friday afternoon, but by 10 p.m., only 1,268 customers were in the dark, most of them in York County.

A storm surge added 2 to 3 feet to the midday high tide, prompting coastal police departments to warn residents about restricted travel. High tide in Portland crested at 13.11 feet by 11:07 a.m., submerging sections of the commercial waterfront and streets near Marginal Way.

Hawley said high tides at 1 a.m. and noon on Saturday would reach the flood stage again – topping out at 12.4 feet and 12.6 feet, respectively. But the storm would be subsiding, he said, so further damage would be limited.

“The storm is going to be gradually weakening and pulling away from us,” Hawley said late Friday afternoon. “It will still be breezy Saturday and there could be issues with succeeding high tides, but it won’t be quite as bad.”

Just before 10 p.m. Friday, with the tide on its way back in, Portland police said Commercial Street had not flooded. On the morning tide, though, waters rose high enough to necessitate road closures along the Commercial Street wharves, as well as in Scarborough, Saco, Kennebunk, Kennebunkport, Ogunquit and beyond.

By 10 a.m. Friday in Portland, Somerset Street near the Franklin Arterial and the Whole Foods supermarket was flooded and closed to traffic. Authorities warned motorists about the dangers of driving through standing water.

“We have our usual spots that flood,” Assistant Fire Chief Keith Gatreau said. “Public works has put up barriers so people don’t drive through it, because what looks like a few inches deep can actually be a few feet.”

Saco public works employees were keeping an eye on a house at 56 Surf St., in the Ferry Beach neighborhood, because the foundation was cracked and separating from the rest of the structure after being battered by waves in Friday’s storm. The owners live in Canada and couldn’t be reached for comment, but the real estate agent who sold them the house in 2012, Mark Fortier, said they were “well aware” of the erosion situation. Fortier said the house was used as a rental property but he believed it was currently empty.

Saco police issued a statement shortly before noon Friday, notifying the public that the Camp Ellis section of the city was closed until the tide subsides.

“There is a possibility of additional road closures during the next four tide cycles,” the notice said. “Specific road closures may also occur based (on) assessments conducted over the weekend.”

In Scarborough, Sawyer Road, where it passes through the Rachel Carson National Wildlife Refuge, was flooded, along with Pine Point Road near the Clambake Restaurant, which was flooded for the second time this year.

In Kennebunkport, the Hurricane Restaurant in Dock Square also was flooded for the second time this year. Kennebunkport police posted a warning on Facebook urging motorists not to drive through areas with standing water.

“Big ocean storm coming. … Please be aware that we will also experience unusual high tides during Friday (11 a.m. and 11 p.m.-ish)!! We will probably need to close the usual roads during high tide (Ocean Avenue, Pier Road, Dyke Road) and a few others. We will be using barricades and cones to stop traffic. DO NOT go around these items, nor should you drive through large areas of standing water. It is a violation to ignore these traffic control devices. Please be smart, plan ahead and use caution during the storm.”

Ogunquit police reported that flooding had closed a section of Beach Street, Israel Head Road and Stearns Road near the pumping station lighthouse and the entrance to Perkins Cove.

What a  difficult and crazy weekend for many of us on the coast. Time to come together as a community to rebuild. We thought we... Read More