A great article on High-end portable toilets amenities and marble. We offer Luxurious Restroom Trailers at a much more affordable rate. Check us out after... Read More

A great article on High-end portable toilets amenities and marble. We offer Luxurious Restroom Trailers at a much more affordable rate. Check us out after you enjoy the article. 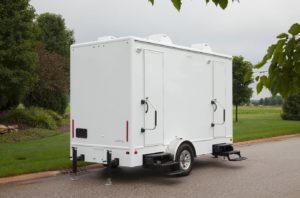 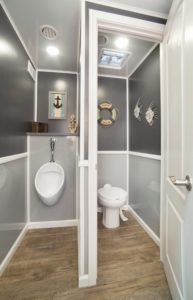 It’s widely acknowledged that the Oakmont Country Club golf course won’t win any beauty contests. Given its history of bringing some of the world’s best players to tears, Miss Congeniality is out of the question, too.

That doesn’t mean its facilities aren’t first-rate, however, and that extends to restrooms.

As U.S. Open crowds flock to the course this week, those with premium tickets or corporate connections will have access to trailers whose branding titles often include the word “elite.” Call them trailers or just fancy porta-potties, they represent a nod to a modern sensibility: Just because you’re out in the middle of nowhere doesn’t mean you have to forgo the niceties in life.

This, of course, extends to the wedding industry. Barn weddings have been a fairly big deal in recent summers, but even backyard events have kicked up the glamour a notch.

“People would go in and say to their friends, ‘Hey, come in. You’ve got to see this bathroom in here!’

For the U.S. Open, better portable facilities are expected by the big-ticket holders. In general, said Mr. John vice president Chris McCarthy, “People are leaning toward higher-end, nicer things … you can have that special VIP area, sell the ticket, and tie together all the extras.”

Charlie H.R. Howe IV, championship manager for the Open, said 500 regular “portolet” units have been trucked in, in addition to 40 of the VIP variety. He added that the Oakmont Country Club terrain “lays out extremely well, operationally. There are also temporary access paths we installed to enable us to place and service the facilities throughout the site.”

Ms. Zatman said she has organized corporate events using fancy restroom trailers, but for real rustic elegance, wedding season provides the biggest challenge. If the nuptials take place in the middle of a meadow, for instance, generators will have to be trucked in to provide power.

The trailers must be air-conditioned, she said, because no one really wants to use the equivalent of a campground bathroom.

Latrobe-based Windswept is a vendor that provides, among other event services, potty trailers and tenting for weddings. It handles about 10-12 tents a weekend during the summer, and the restroom trailers are booked months in advance, according to a spokeswoman.

It’s not just trailers that must be serviced; tanks also are required for holding fresh water and collecting waste.

Windswept’s three- and four-stall units rent for $1,650 a weekend, which means Wednesday or Thursday with a Monday pick-up. The six-station unit is $2,200.

For the 2010 wedding of former first daughter Chelsea Clinton and Marc Mezvinsky on an estate in Rhinebeck, N.Y., the media picked apart all cost aspects of the event. Guesstimates ranged from $2 million to $5 million, and TMZ.com went so far as placing portable restroom rental at $15,000.

Ashley Moss Kurkiewicz owns Pittsburgh’s Hello Productions, which also has a location in Raleigh, N.C. She said she’s yet to meet a bride who didn’t appreciate a restroom upgrade. She noted many will add decorative touches, such as a basket of soaps or potpourri, and “tenting” the unit also adds a bit of formality.

This involves setting up a tent, usually white or off-white, or drapes around the unit. Just the door and stairs are visible to guests.

“We typically will recommend it is tented just because with Pittsburgh weather, you just never know,” she said.

Ms. Zatman, the Fox Chapel event planner, agrees. “For a nicer effect, I’ll actually tent around [the restroom] so you’re not actually looking at the trailer. Or we might do a walkway tent leading from the wedding tent.”

No matter the weather or the size of the event, planners say, people are happy to realize that when they go, they can go in style.

A great article on High-end portable toilets amenities and marble. We offer Luxurious Restroom Trailers at a much more affordable rate. Check us out after... Read More